Home » News » Insights » Commentary » An Interloper at the Peoples’ Summit

An Interloper at the Peoples’ Summit 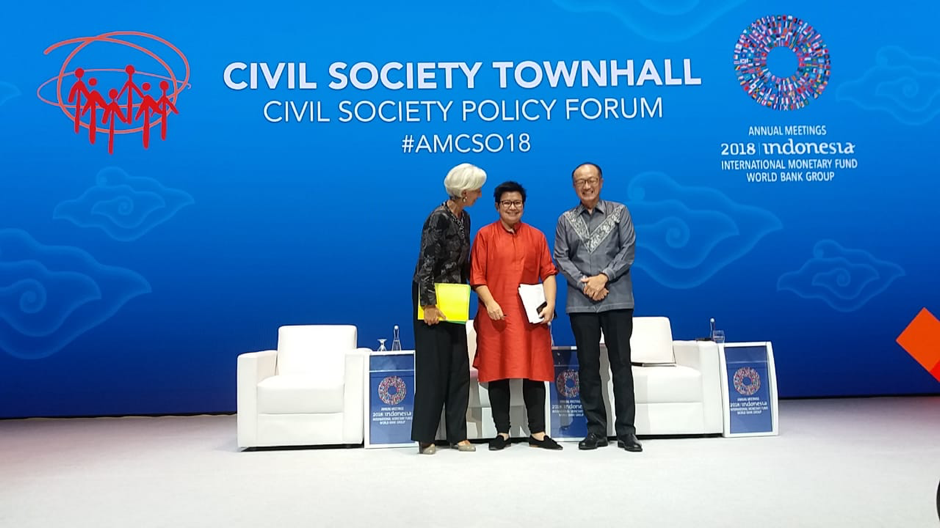 In the globally branded hotels nestled discreetly beyond the immaculately manicured lawns of Nusa Dua, they gathered.

Some 15,000 people attended the annual meetings of the World Bank and the International Monetary Fund this year. It is a grand and important event in the global calendar for international and internationalised leaders.

A few kilometres away from this sterilised zone a meeting of civil society activists came together a couple of days earlier to conduct their own Peoples’ Summit.

Yours truly was honoured to play a modest role in developing the communique from the Summit that was presented to the President of The Bank, Jim Yong Kim, and Managing Director of the IMF, Christine Lagarde.

The Bank and the IMF

These August institutions were established in 1944 as a future post-World War II vision for the world began to appear. Both institutions have gone on to lend collectively over a trillion dollars to both developing and developed economies.

Interestingly this covers over USD 400 million provided to Australia, including USD 100 million to assist fund part of the old Snowy Mountains Scheme .

Loans undertaken that involved the mass displacement of locals to make way for big infrastructure projects have often come under critical scrutiny in the way these “victims of progress” have been treated in terms of just compensation and even their basic human rights and right to live.

“Who indeed are the actual beneficiaries of these projects” is a common concern among civil society activists.

These days concerns about environmental impacts are growing. When informed by one civil society delegate that the World Bank was still lending for coal development projects, the Bank’s President Jim Yong Kim called for details declaring this went against the Bank’s policy and if proven correct someone’s head would roll for this.

Beyond development projects, be they for funding physical infrastructure or social services, both the Bank and IMF are also extremely actively in selling their economic advice.

The economic orthodoxy provided, often referred to as the Washington Consensus, invariably proposes an array of economic liberalisations of capital, resources and labour and support for economic globalisation.

The Washington Consensus – what consensus?

Recent ideological movements globally including from the White House in Washington itself as well as Brexit suggest that this Consensus is breaking down even in countries committed traditionally to the panoply of policy prescriptions espoused by the Consensus.

In civil society, suspicions of the corporate Big End of town is much more entrenched. Old term slogans like “live local, think global” or “live simply so others may simply live” all come from this kind of civil society demands for equity.

Traditionally these kinds of mass meetings of the global institutional elites have come with unruly and often violent counter-demonstrations led by those who believe they are, or they are voicing concerns of those who are, excluded from the globalist conversations taking place at these conferences.

The Bali conference was not afflicted by such problems. Indeed, the key conferences provided space for civil society engagement where the fruits of consideration and debate within various civil society conferences, including the Peoples’ Summit, could be fed.

One such event included the Civil Society Townhall where citizens anywhere around the world submitted questions to be answered directly by Bank President Jim Yong Kim and IMF Managing Director Chrisine Legarde. This session was chaired by an Indonesian civil society leader, Monica Tanuhandaru.

The Peoples’ Summit discussed many of the issues of concern to civil society with regards to the lending and advisory policies and practices of the Bank and the IMF.

These include now traditional concerns about the historic injustices created by loans that uprooted people and other related forms of institutional accountability, issues of corruption, assets recovery and inadequate transparency, gender inequity, natural resource management and equitable access there within, and climate change action.

Other issues raised included demands to develop a more sustainable financial sector and concerns about the digital economy and the impact this is having on access to decent work together with calls for tax justice and addressing issues of income and wealth disparity.

A notable focus was also on the propensity for the contemporary economic transformation being powered by the digital economy that, while creating new efficiencies, is also creating huge wealth (and income) disparities particularly within societies.

A common theme underlining the general concerns of civil society is the tendency of the “Washington Consensus” to see people as mere economic objects rather than as subjects of development and to consider even socio-economic issues such as investments in health and education primarily from the view of advancing the economic values of educated and healthy (therefore more productive) workers rather than as a means to advance human development and dignity as an intrinsic good in itself.

This reduction of people to mere economic tools and consumers is an issue that generated considerable concern among activists. Similarly, there were concerns expressed about the capacity for people and societies to adjust to the acceleration of disruption and to do so while maintaining, if not advancing, equity and justice.

Civil society and the new Populists – some common ground?

The retreat by so many citizens in so many countries to the perceived comforts and security of primordial affiliations such as religion, nostalgic culture and ethnicity reflect a reaction to the deluge of change and disruption and a general subversion of certainty around them.

Related to this are the desires to build mental and indeed physical walls around this change, most notably at the national frontiers through affirming the primacy of separate national sovereignty; the rise of a form of neo-Westphalian sovereignty as it were.

This phenomenon is evidenced in the more muscular kinds of political and electoral nationalism that have arisen over the past decade both in democratic and non-democratic nations.

The idea that long term national economic success is sufficient to provide a sense of security is also under serious question.

Two years ago The Australia-Indonesia Centre released a major study on attitudes of Australians and Indonesians about themselves and about each other .

One of the most startling findings was on attitudes towards the future. In response to the question of whether they expected economic circumstances to get better or worse over the next 10 years, some 82% of Indonesians thought things would improve. In Australia some 40% expected economic conditions to worsen.

Considering Australia has enjoyed steady and uninterrupted economic growth for over a quarter of a century, this gloomy outlook is nothing short of stunning. What is driving this “funk” in the way people in this traditional rather sunny Western country are seeing their future?

More intriguingly, what kind of views are likely to be held by people, particularly in Europe and the USA, that have been experienced some quite sharp recessions and lethargic growth over the past decade?

Could this “funk” be providing the kind of energy that has seen a growing rejection of politics as usual and an embrace of a rejection of global integration and exchange in these countries, together with the rise of political entrepreneurs ever ready to exploit these waves of angst and fear?

Or is it as supporters of this rejection of politics as usual claim, they are not benefiting from these changes nor do they see that they or their children will enjoy any benefits into the future as long as the current status quo is in existence.

As a result, they are willing to choose something, anything, else that at east opposes the more of the same approach of the now partisan mainstream.

Many of the anti-globalist concerns being expressed in the polls by citizens in so many societies are not so different to those expressed by activists attending the fringes of these global gatherings such as the one in Bali.

Most of the civil society activists at these events would be appalled, like the elites inside the big conferences, at the oafish and xenophobic exclusivism of some of these anti-globalists at the ballot boxes across the world.

Nonetheless the activists do share many of the same concerns on issues of subverted personal and community sovereignty, the growing gap in opportunity and outcome between those with an inside running on the new digital economy versus the rest of society, together a perceived failure of economic libertarianism to deliver a sense of economic security, despite the truly historic improvement in standards of living for hundreds of millions of people across the planet over the past generation.

Shaky reminders of a shared fate

The reality of the ultimate shared fate for all those who visited Bali was symbolised somewhat starkly by the rude awakening we all faced early on the morning of 11 October, when a serious earth tremor struck the north coast of Java, forcing all of the great and the humble to exit our hotels to await news of whether we would have to race inland to escape a possible tsunami. Fortunately, that early morning we were lucky.

Another very elegant statement that humanity shares a similar fate was delivered by President Joko Widodo in his key note address to the Annual Meeting of official delegates.

His speech captured the concerns of many people about divisions around the world, including on the potential damage to be caused by trade wars and divisions among the major economies, and the impact this can have on the security of people everywhere.

His deployment of the analogy of “Winter is Coming” from the globally famous TV series Game of Thrones was received with more passionate enthusiasm that would normally be expected from a gathering of sober public sector financiers.