Why Australian business needs to wake up to a digital world 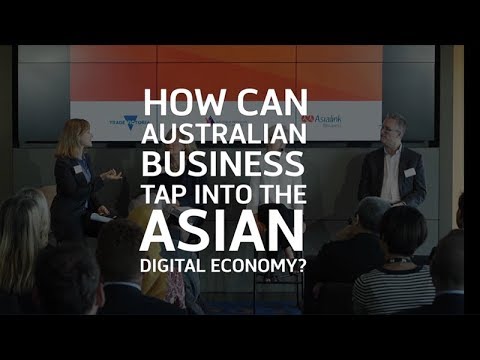 A forum on Digital Economy brought together lead thinkers in trade, business and digital technology. The Australia-Indonesia Centre conducted the panel with several partners – Trade Victoria, Asialink Business, and Australia Indonesia Business Council. The AIC will bring you a series of short videos outlining several key themes to show the trends, which as it turns out, also acts as a warning to move faster in this space.

There is tremendous change happening in Indonesia, and South-East Asia. It is a region of economic growth, a young demographic, and growing desire for a better life. People are looking for solutions to problems to improve their everyday experience for themselves and their communities; ideas around access to clean water, trusted food sources, better medical advice and efficient transportation are at the forefront of this trend.

Most of these challenges will have a digital component as part of the solution. However at a recent forum on the digital economy, the discussion quickly became around the lack of awareness and preparation by Australian business for what lies ahead. And if it is ignorant of the trend, then it will also miss out on the opportunity.

Dr Stephanie Fahey, the chief of Australia’s trade and investment body, Austrade, told the audience that 45% of the nation’s businesses did not even have website. It means that these businesses, in the digital era, have no way of connecting with people who, increasingly, are doing everything in the digital space, mainly on their smartphones.

For example, the Indonesian fruit and vegetable growers who have turned to a digital hub app to help them access funding for inputs, and markets to sell into. Or a health app that assists people who have fallen through the funding cracks of the health system.

“It’s quite clear to me, and others in Austrade, that economies are changing rapidly,” she says. “And for Austrade to remain relevant we’ve got to change as fast as our clients are changing. We need to ensure that they get into global markets and global value chains. And they need to digitise their business.”

Andrew Parker, Partner (Asia Practice Leader) at PwC, points out that South East Asia is home to 620 million people with economic growth hovering at around 5%. Compare that to Australia, which it’s predicted could be dropping out of the G20 within 10 years, while Indonesia moves ahead, and into the G8, within 15 years.

“So if we’re going to have global industries, if those industries are not in Asia, I don’t think you can say that we’re a global company or a global country.”

Chair of LaunchVic, Laura Anderson, told the audience that on her most recent trip to Jakarta she’d come across a willingness to bring entrepreneurs and traditional business together by tapping into a shared passion, for instance, working on a creative project around coffee. And that initiatives such as these should show the longer-term benefits of engagement between the two countries.

“Whenever there is a gap there is an opportunity, and I think it requires what I call the “art” of the long view. So understanding the outcome and trends, and what that means for us, as a country, as a state, as an economy and as a society,” she says.

Being in Asia also provides an understanding of just how vital technology and digital communication has become.

The mapping of social media use shows that Indonesia is one of the world’s biggest hot-spots, which means having an online presence or a digital offering is crucial to success.

Andrew says “.. mobile phone penetration is phenomenal in these countries. In fact, in Indonesia in the next one or two years we’ll probably tick over the 100 million mobile/smartphone user mark.”

“That is a staggering number.”

Indonesia’s young entrepreneurs are using technology to solve their local problems. Australian companies can’t presume they have all the answers, however they might be a part of the change by collaborating instead.

The strength of traditional Australian business is that aside from exporting commodities, is that it has also built up digital services around such enterprises. This is a strength that could be leveraged. And according to Austrade, entering via technology might prove less of a hurdle in a complex regulatory environment.

“And I do think there are opportunities for Australian business if they change the way in which they approach Indonesia, that it’s not going to be as difficult in these new industries as it’s been in those more traditional industries.”

However, again the audience heard that time is running out.

“I can tell you it is changing fast. It’s like breathtakingly quickly. And I think one of the big mistakes that Australian businesses make is to assume that we, because we’ve got one hundred years of doing things the way that we do, are leading the world and know everything … our companies are in real danger of being cleaned up,”  Andrew says.

When it comes to research, connecting with communities and the younger people who are driving growth and change is something that the Australia-Indonesia Centre is highly mindful of, and keeping in mind as it develops its research programs for the next four years ahead.

To be a part of making Australia part of the new economy, and not letting growth just slide away.