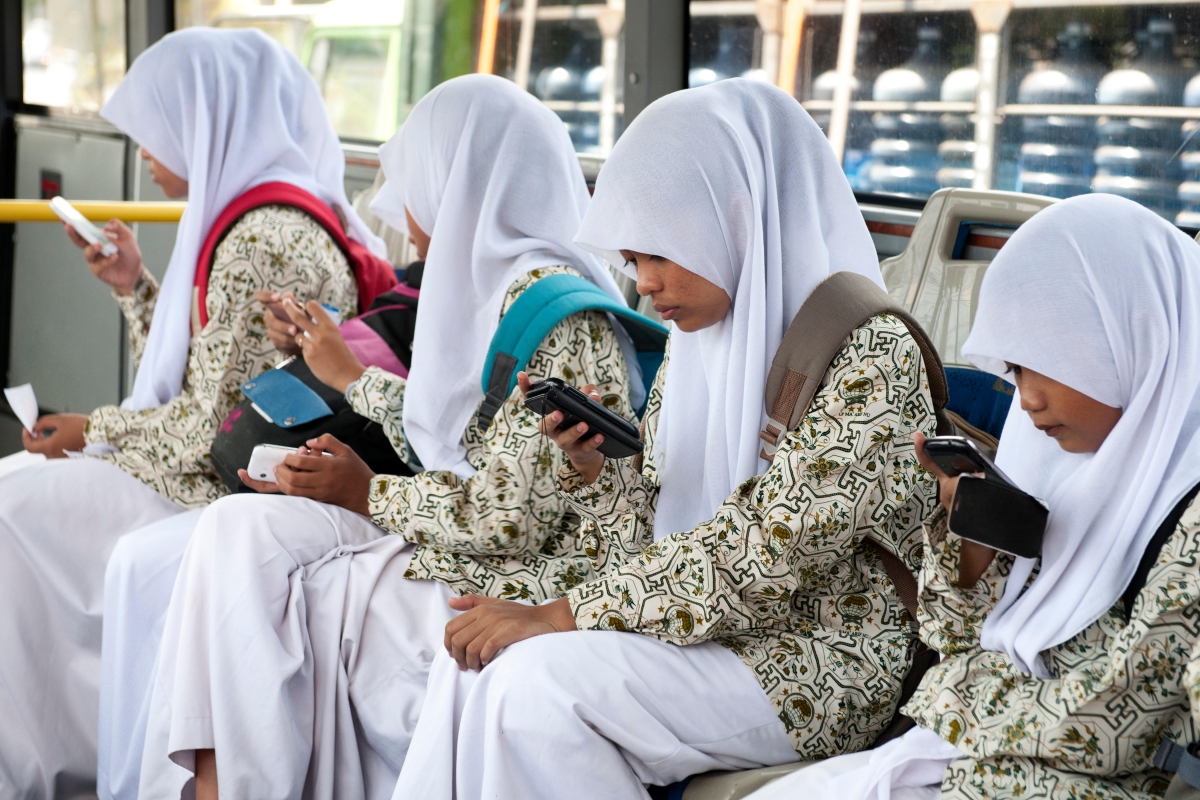 Indonesia is quickly becoming the most digitally connected nation in South East Asia. Will Australia’s tech entrepreneurs be a part of this remarkable transformation?

On a recent trip to Jakarta I was shown by a friend an app on his smartphone which allowed someone to invest in the sale price of a goat or sheep by paying the farmer for its care for three months. Another showed me one of his ventures which was providing credit to people with no banking history by analysing their browsing and shopping habits. Then I paid for my coffee one morning and the woman next to me asked if the shop took credits from a private payments app.

I have not had any such similar conversations with any entrepreneurial 30-something-year-olds in Australia. The market opportunity and ideas about what the digital economy can deliver is very different for the two countries. And in a way that difference encapsulates the challenge for them to connect when it comes to using digital systems and creating some amazing partnerships.

While Australia is the more developed in terms of digital knowledge, Indonesia is one of the economies that is pushing ideas of disruption and technical leaps. If Australia does not understand what is happening then it risks missing out on using its home-grown smarts in a much bigger way.

Most Australians will be unaware that Indonesia, just to the north, has created four unicorn start-ups (private companies valued at more than US$1 billion) in the last decade.

The potential for innovation and scale in Indonesia has seen global players such as Alibaba, Tencent, Google and Softbank (from China, US and Japan respectively) investing significantly in those four unicorns. In a nation of 260 million with 80 million smartphone users, these tech giants are coming in now to grab market share while it is still in the formative stages. They are bringing new ideas, technology and ambition – the race is very much on.

And Indonesia is doing this without even so much as a backward glance at a country like Australia. It is an ecosystem all of its own dynamic design, working in a regulatory environment which is also in motion.

To give you some idea of the interest being taken in Indonesia, a report found that in 2017 overall investment in Indonesia’s start-up scene reached three billion dollars in the first eight months of that year alone.

What makes this trend all the more interesting is that it is being driven by tech-savvy, educated young Indonesians who see a chance to make an income, and a difference, in a country where being digitally connected is the way of life.

A 2016 report by consulting group McKinsey found that these connected Indonesians “are netizens in every sense of the word.”

The best known of the four unicorns is Go-Jek, which has turned from a motorbike ride-hailing app into a national logistics and payment system worth an estimated $5 billion. It is now moving into other South East Asian markets. Several years ago, I interviewed founder Nadiem Makerim for a story on Indonesia’s young entrepreneurs. Now 34, he is a national superstar. And the multi-billion-dollar business he helped create, based on the practice of jumping on the back of a small motorbike to get through Jakarta’s notorious traffic, would not be possible in Australia for obvious regulatory reasons. But the way it has evolved and built to scale is a business lesson in itself.

These kinds of businesses and thousands of others are powering ahead with their ideas, and in the process are changing the way people transact and interact. They are at the forefront of the global change taking place, raising questions about the nature of labour and industry, of cost cutting and efficiencies, and of the kinds of interaction between traders and consumers. And they are building the systems and technologies to do it, which means that eventually it may be possible that what is happening in a country such as Indonesia could lead to a business that competes in the Australian market.

This is a very different Indonesia than the general view of most Australians. For most, Indonesia is about the acts of terrorism, extreme Islam and natural disasters which grab the headlines and imaginations.

If these simplistic understandings continue it will likely mean that Australia’s talent will miss out on a chance to learn about creating a business in this kind of digital environment, and how they can use their knowledge to be a part of the progress.

The chief operating officer of one of the Indonesian unicorns has already seen the opportunity and tapped into one of Australia’s strengths. Willix Halim, from Bukalapak, made a visit to Melbourne not long ago to recruit graduate talent for the e-commerce site that serves small merchants and farmers. Having studied, lived and worked in Australia, he knew what he was looking for:

“In terms of skill sets the Australian ecosystem is obviously more mature and we do want to get the top management and product management in technology areas.”

However, he made the point that while the individual technical skills are there, the business DNA to compete in such a fast-moving market was generally lacking.

“I think that comes down to mindset. We came up with new features in a matter of months, sometimes in a matter of weeks. And that is required in such a competitive business, especially in a competitive industry like e-commerce. Being the first to it is very powerful, and also being at the right time. So, if you lose that wave which is usually within weeks or months, you will lose the whole market,” Halim says.

The Australian infrastructure and technical knowledge are well advanced and there are some notable examples of innovation – Atlassian is one of the stand-outs with around 85,000 subscriptio customers, and millions of users. It has secured prestige clients from around the world.

But Bukulapak has 37 million monthly active users and is processing 320,000 orders a day. And it is building an R&D centre in the city of Bandung with the aim of attracting 200 engineers to create more products.

However, there are some significant challenges to the evolution of Indonesia’s digital economy. Despite Bukulapak’s plans in Bandung, Indonesia is facing a shortage of experienced engineers, with competition for the talent leaving other start-ups in the lurch as they can’t offer the higher salaries.

Go-Jek’s Makerim has called on the government to open the visa system to allow trained foreign engineers in. “Although Indonesia has great creative, problem-solving, design-oriented engineers and mobile developers, they are not enough, and they don’t have enough experience,” he says.

There are also capital shortages for those companies not in the top tier.

Nevertheless President Joko Widodo has staked the nation’s future on the adoption of digital technologies, to improve productivity and generate skilled employment.

His “Making Indonesia 4.0” plan aims to improve manufacturing capability and competitiveness by adopting digital technology, and in the process create 10 million new jobs by 2030. The size of the idea is indicative of the hurdles the country faces – while e-commerce and fintech are generating much excitement, there is still a long way to go to develop a more efficient manufacturing sector. But business and local governments are looking.

In November 2016 the president also announced the “1000 start-ups movement” to find and build new high-tech start-ups by 2020, with the hope that these will help drive the nation’s progress by creating jobs, boosting productivity and perhaps even becoming internationalised.

As in many parts of regional Australia, there is also a sizeable footprint in Indonesia where people lack access to the infrastructure needed to be “connected” and take advantage of the digital change. The 2016 McKinsey report found that while the internet itself is inexpensive the average quality is poor, and internet penetration in Indonesia was at 34 per cent (compared with 88 per cent in Australia).

Like Australia, Indonesia has to find a way to deliver stronger connectivity solutions to the more remote and rural areas, to help small business people, farmers and agribusiness improve productivity and connect more usefully to markets. Working on these common problems could yield some fabulous solutions.

A multitude of start-ups, innovation labs, venture capital events, and co-working spaces abound in the parts of Indonesia that are connected to digital infrastructure. The question is how to connect these budding entrepreneurs, mixing the skills of technical and business systems experience with the knowledge of a dynamic market to create some groundbreaking digital products.

It won’t work to transplant an Australian solution into the Indonesian environment. And this is where a much better understanding of the needs of a nascent, fast-moving market are critical. Some Australians are in, getting a feel for Indonesia and developing the networks and trust that are needed to carve out a space. And venture capital is also starting to take a look at what investments could prove up.

But one Indonesian venture capitalist has often lamented that he has Japanese, Koreans and many other nationalities working in his office to learn about the tech scene, but no Australians. But fostering bilateral digital connections is on the Australian government’s agenda with Austrade identifying the digital economy as one of the strongest potential drivers of growth in engagement between Australian business and Indonesia over the next 10 years.

Meanwhile some influential Indonesians are looking to Australia for technology ideas and applications. On a recent visit to Melbourne, former Bandung mayor turned West Java provincial governor Ridwan Kamil, talked to agtech start-ups to see how they might help his 40 million constituents.

Ridwan has already gained international attention for his smart cities vision and he now intends to take that further in his bigger role across West Java. He is especially looking for agricultural technology that could be adapted to help tens-of-millions of farmers to provide food more sustainably and be better connected to markets. He regularly posts his ideas, as doodles, to his 9.3 million Instagram followers.

This is the kind of big vision that an Australian business could be a part of, if they have the foresight to step in and learn first-hand about what is going on to find ways for entrepreneurs to work together to create technology companies.

In the area of financial technology, there have been some moves. In 2017 Austrade and Fintech Australia signed what was described as a “landmark” memorandum of understanding with the Indonesian Fintech Association to exchange talent and information while helping each other’s sector to grow.

Fintech Australia’s then chief executive Danielle Szetho, who visited Jakarta for a tech forum after the MOU said:

“Australia and Indonesia have vibrant, complementary fintech ecosystems, but we are only just starting to build the connections between them. Our two markets are very different, and that actually represents a huge opportunity for innovation if we can work together more closely to help companies understand the contours of each other’s markets.”

However, it really is up to Australian digital entrepreneurs to pay attention to what is happening to the immediate north in South East by shifting their focus from what’s happening in the old favoured economies such as the US and UK.

This will mean learning about concepts such as the “unbanked” where 80 million people and small businesses in Indonesia will require secure means to facilitate their financial inclusion in the near future.

Indonesia has become the case study for what happens in a nation of millions of smartphone users, with evolving government regulations and a young demography that is the most digitally connected in South East Asia.

It is happening right on Australia’s doorstep. The challenge is for the Australian tech sector to have the courage to step in, have a look around and engage with the Indonesian development, to determine if what it is working on could be a part of something much, much bigger.