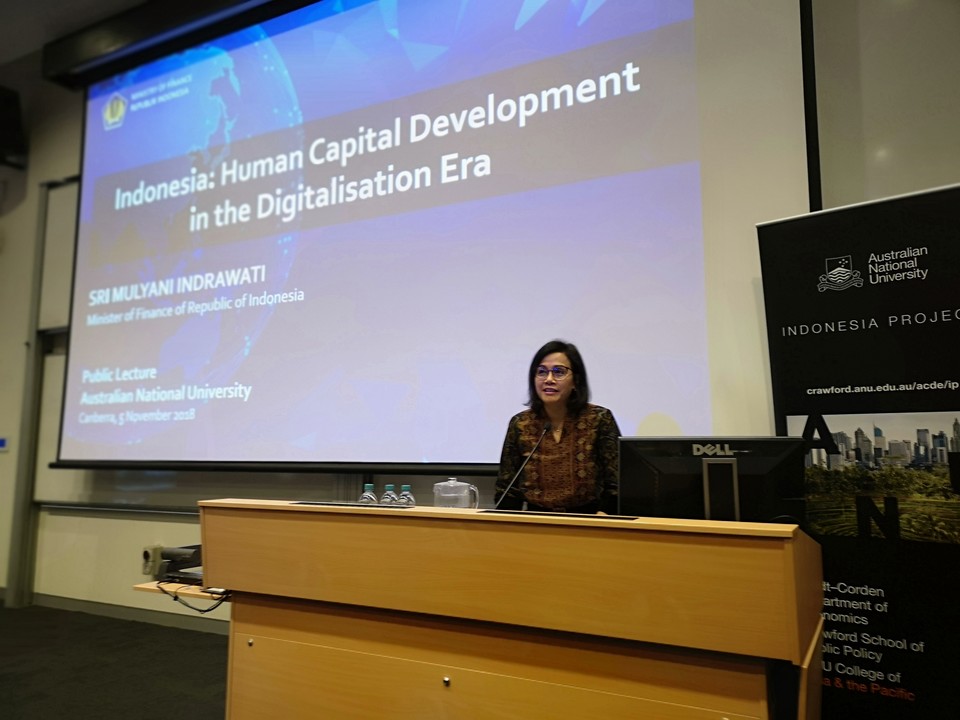 Digitalization is a new driver to economic growth that can improve the efficiency and the business process productivity. Digital economy is actually has broad meaning. If we are referring to the Asian Development Bank’s definition, the digital economy refers to a broad range of economic activities that use digitized information and knowledge as key factors of production. The “digital economy” is sometimes defined narrowly as online platforms, and activities that owe their existence to such platforms, yet, in a broad sense, all activities that use digitized data are part of the digital economy: in modern economies, the entire economy (International Monetary Fund). According to Oxford Economics, digital economy has huge potential as a 1% increase of mobile penetration an increase can create 10,700 extra formal jobs and $640 million to GDP in 2020.

Industry 4.0 is the current trend of automation and data exchange in manufacturing technologies. It includes cyber-physical systems, the Internet of things, cloud computing and cognitive computing. Industry 4.0 is commonly referred to as the fourth industrial revolution. Enabling more direct models of personalized production, servicing, as well as customer/consumer interaction and cutting the inefficiencies, irrelevance and costs of intermediaries in a digital supply chain model, where possible, are some goals of Industry 4.0.

Digital economy allows the use of digital technology for a wide-ranging of economic activities. Digital economy will lower transaction costs, reduce information asymmetries, and increase economies of scale. Thus, it leads to increase in Indonesia’s financial inclusion level, which in the end will support the government in reducing inequality, alleviating poverty, and creating jobs, as well as achieving inclusive growth.

According to McKinsey study, if Indonesia is assumed to have a growth trajectory of 7% a year, implementing digitization can contribute to an estimated of USD150 billion in growth by 2025, which is equivalent to 10% of 2025 GDP, and create 3.7 million jobs. This condition can be achieved if digitization is applied to boost productivity of all sectors and to increase labor participation of all segments of the society in the economy. In e-commerce, Indonesia’s e-commerce revenue amounts to USD9.14 billion in 2018 and is expected to grow 16.6%, resulting in a market volume of USD16.87 billion by 2022. User penetration is 40% in 2018 and is expected to reach 48.3% by 2022. Moreover, the number of e-commerce users hits 107 million users in 2018 and expected to increase 5.9% annually.

Along with the opportunities, digitalization and The Fourth Industrial Revolution’s wave of technological advancement create some challenges. It will reduce the number of workers required to perform certain work tasks. Machines & algorithms most often complement human skills so that reskilling is important. The Fourth Industrial Revolution brings an implication that there will be a significant change in employment proportion caused by the advances in automation that will result in the replacement of the human workforce. In addition, the work that currently performed by humans is being augmented by machine and algorithmic labor. The tasks such as Information and Data Processing and Job-Related Information are estimated to be the most replaced by machine by more than 50%.

Technological change in job roles and structures lead to the faster demand for skills. Current progress in the job market might substitute workers, but this also lead to new opportunities for others. Indonesia government will put significant effort in maximizing the benefits while minimizing the losses through, for instance, reskilling the workforce.

Digitalization also changes the ratio of human-machine working hours. According to World Economic Forum, in 2018, an average of 71% of total task hours are performed by humans, compared to 29% by machines. In 2018, in terms of total working hours, no work task was yet estimated to be predominantly performed by a machine or an algorithm but by 2022, this picture is projected to have somewhat changed, with machines and algorithms on average increasing their contribution to specific tasks by 57%.

Indonesia government is addressing the impact of new technologies on labor markets through education policies to accelerate education and skills levels of individuals, particularly with regard to both science, technology, engineering and mathematics as well as non-cognitive soft skills. Also, it will enhance job creation through public investment as well as by leveraging private investments and improve the social safety nets and extending existing social protection schemes.

The government is making significant investments in Indonesia’s human capital to build the foundation of a more competitive economy in the future. Under the leadership of President Joko Widodo, the government will continue the reform efforts aimed at promoting inclusive and sustainable growth to address Indonesia’s pressing development challenges –improving the quality of human capital is key and education is an important element of this. The key strategic policies are as follows:

First, enhanced training curricula for workers so that they will have better soft skills. The curricula included new approaches to deal with complex problem-solving, critical thinking, stimulating creativity, effective human resources management, service orientation, negotiation and cognitive flexibility. While on the hard skills, the government is improving the curricula for different job qualifications and competencies in at least 11 economic sub-sectors, such as information and technology, fisheries, transportation, energy, tourism and construction.

Second, promoted competency-based vocational training and apprenticeship programs. The government have been experiencing increasing collaborations among vocational schools with the manufacturing and service industries, benefiting not only the students and the teachers, but also the industries as well.

Third, improved the qualification, requirement, and the operation of professional certification institutions across the country.

This is an excerpt from Sri Mulyani’s Public Lecture at Australian National University, Canberra, 5 November 2018. It was originally published on LinkedIn. You can watch the full lecture online here.