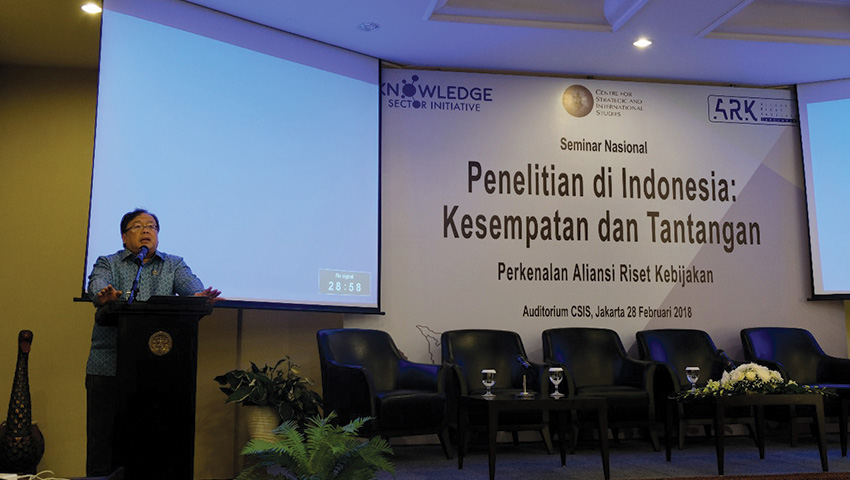 Indonesia needs to make a concerted effort to strengthen its research ecosystem – including policy research – to be able to compete with other countries in the region.

One key challenge in Indonesia’s research ecosystem is the availability and accessibility of data and research.

To help address this, the Indonesia Alliance for Policy Research (ARK), with the support of the Knowledge Sector Initiative (KSI), has launched a website www.ark-indonesia.id and database application which brings together data and research on a range of policy issues.

The database was created to support policymakers and the public to access research findings more easily.

The website and application were launched during a national seminar on “Research in Indonesia: Opportunities and Challenges” at the Center for Strategic and International Studies (CSIS), Central Jakarta, on Feb. 28. The seminar was attended by the Minister for National Development Planning Bambang Brodjonegoro.

A representative of ARK, Yolanda Panjaitan, said data for the application had been provided by the 16 members of ARK as well as several ministries and included qualitative and quantitative geospatial data.

“The application helps address the need of ARK members and other policy research organisations for an integrated database,” Panjaitan said during the event.

“The application also includes data on gender and social inclusion (GESI) issues. We hope this will help policymakers to better understand these issues and take them into account in policymaking,” added Panjaitan, who is also a researcher with Cakra Wikara Indonesia.

The strategic role of ARK

Brodjonegoro acknowledged the strategic role of ARK in bridging the gap between researchers and policy makers, who often seem to be on opposite sides.

“I congratulate ARK on the launching of the database and hope that it supports high quality research which can contribute to policy planning,” Brodjonegoro said in his speech.

He added that ARK’s member organisations should continue to focus on their role as think-tanks producing research and analysis on key policy issues.

By producing research that the government can apply to policy problems, ARK would complement the work of other research centers, such as the Indonesian Bureau of Economic Research (IBER), which is more focused on basic research on public policy issues, Brodjonegoro said.

For example, South Korea’s investments in research and development enabled it to develop from one of the poorest countries in Asia to a high-income country.

There are 26 think tanks in Indonesia, only two of which are ranked among the top 20 think tanks in Southeast Asia and the Pacific, namely CSIS and ERIA.

The development of think tanks in Indonesia had been hampered by the lack of government funding, with only allocated 0.1 percent of the country’s gross domestic product allocated for research, Brodjonegoro said.

This was low compared to other countries, including South Korea, Singapore and Malaysia which allocated 4.04 percent, 2.20 percent and 1.07 percent of their GDP respectively.

Brodjonegoro said it was not easy to allocate more funds for research in the State Budget (APBN) and that research was still seen as a luxury.

“There are a lot of budget items in APBN. The question is whether research is prioritized over developing infrastructure in Papua or reducing poverty,” Brodjonegoro said.

Tax incentives for research could help to develop Indonesia’s research ecosystem, he said.

Bappenas is currently developing a plan to increase tax deductions to 300 percent for industries which develop their own research. Currently, the incentives are only 100 percent.

This was much lower than Thailand and Singapore, which provide 200 percent and 400 percent respectively.

In a statement made at the end of the seminar, ARK members urged government representatives to allocate funds for social research in national and local government budgets and to make government data more open to support better research.

This article was originally published by the Knowledge Sector Initiative. Read the original article.