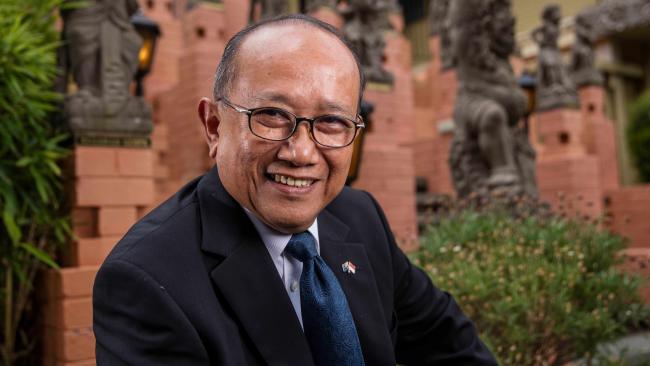 Australia and Indonesia are poised for significantly closer military, security and economic ties as Jakarta’s ambassador to Canberra drew a line under two years of tension by declaring the critical relationship to be back on track.

Nadjib Riphat Kesoema told The Australian that Malcolm Turnbull’s visit to Jakarta last month for talks with President Joko Widodo created an atmosphere of hope and optimism in the relationship between the two nations.

“It is full of expectations for the future.”

The leaders’ meeting was a landmark in the relationship ­between the nations, he said.

Mr Nadjib was recalled from Canberra in late 2013 for several months after it was revealed an Australian agency had in the past spied on then president ­Susilo Bambang Yudhoyono and his family. Tony Abbott, who was prime minister at the time of the revelations, did not explain nor apologise.

In August, the ambassador used an essay published in The Australian to call for an intensification of relationship-building and for both sides to put aside “megaphone diplomacy”.

Mr Nadjib’s essay came as Jakarta and Canberra tried to reset the relationship after the tensions over the spying allegations, people smuggling, policies to stop asylum-seekers boats and then the execution of drug smugglers Andrew Chan and Myuran Sukumaran.

The Turnbull-Joko meeting that followed in Jakarta was “a special juncture” that set that course to a future together, Mr Nadjib said. “It was not just dry policy,” he added.

“With the style of the Prime Minister and his relationship with my President, it’s No 1 — it’s very important for us,” he said.

Mr Nadjib said the two leaders set the scene for a much closer ­relationship at all levels, “economy to economy, people to ­people, security to security and military to military”.

Subsequent meetings of ministers responsible for foreign ­affairs, defence and national ­security in Sydney and Jakarta had built on that relationship, bringing the broad strategic agreements into practical action.

People smuggling was still an issue for both countries with about 13,000 asylum-seekers in Indonesia who did not want to stay there. “They want to go maybe to Australia or to somewhere else,” Mr Nadjib said.

There would be more talks under the Bali process next year, he said, and they would be ­co-hosted by Australia.

“That’s why we have developed an atmosphere of tolerance in Indonesia and we try to bring all people, whatever religion they have, together in a dialogue.”

Both nations were victims of radicalisation and extremism and the exchange of intelligence to deal with terrorism was very ­important, he said.

Mr Nadjib said Indonesia had a very strong relationship with China, especially through economic links, but it shared with ­Australia concerns about developments in the South China Sea.

Indonesia’s foreign policy was “free and active”, and did not stop Jakarta having a close relationship with Beijing and Canberra.

“These are international sea lanes,” he said. “We hope that everybody is restrained in their actions. Like Australia, we are not claimants but we want a peaceful South China Sea. We are friends with everybody.”

Mr Nadjib said Australia and Indonesia already had very good economic relations and he would like to see that develop to benefit the people of both countries.

“We would like to export more machinery to Australia,” he said.

“We can learn a lot from you,” he said. “And you have modern defence equipment. We would like very much to have the opportunity to exchange experience and we send our officers to your military training schools here.”

Australian officers could learn, too, from the grassroots style of the Indonesian military, Mr ­Nadjib said. “They are born from the people itself to defend the freedom of the country,” he said.

Despite being very close geographically, there were major cultural and other differences between Indonesia and Australia and misunderstandings could arise if there were not sufficient dialogue.

“We have to have good interaction, to put aside all the misunderstandings that we have,” Mr Nadjib said.